So in my last blog post, I said I would make one about my weight loss!  Here is a side-by-side photo comparison of me in 2008, when I wanted to lose weight and took some before photos, and last night, after going for a run.  This was when I attempted P90X or something like that… The difference here is about 30 pounds.  I feel that it’s quite obvious, but what you think may differ.  All I know is that at that weight, I wasn’t comfortable with my body.  I’m much happier today with where I’m at physically.  This is the lead up to the title of the post, “My Body, My Craft.”  Take a look below:

Obviously, I could use some more exercise in my life.  What I want to emphasize here is that the majority of my weight loss has been through DIET ALONE!  Yes, I get some physical activity in my side job working at a restaurant and walking around town, but I don’t do a lot of cardio.  I HAVE been doing pushups, pullups, pressups, squats, lunges, crunches and such.  But not even that often.  I know.  It’s a work in progress!  But the reason why I titled this post the way I did is because as an actress, it’s important that I look my best for my type of casting.  I don’t want to be the chubby, funny Asian friend.  I have always played the ingenue, and that’s the casting I want to develop further.  In order to do that, I’ve got to work for it, and get myself in the best physical shape I can.  I’m beginning an exercise program and if I can get some results, I’ll post photo updates.  But anyway, what I CAN tell you about today is the diet portion of my fitness journey.

The key to my 30 pound weight loss has been a SLOW CARB DIET (SCD).  I decided to follow this diet format after my friend Justin drastically changed his body in the time I took to travel around the world.  (I was gone for 4.5 months!)  In that time, he dropped from about 180 to around 145lbs, and went from wearing a size 36 to a 30 in pants.  He’s about 5’8″.  Those are some pretty significant losses.  Even though I saw how much he had changed and how great he looked (even though I didn’t think of him as fat before!!!), I really didn’t want to hear about how he did it.  It seemed like his diet was no fun when we went out to eat.  But as we were housemates, I saw firsthand how he was eating, and slowly, he introduced me to the basics, and eventually, I became receptive to the idea of trying it.  It was then that he created the Three Week Challenge with me.  He guaranteed that if I followed the SCD for THREE WHOLE WEEKS…I would see some results.  I kind of harumphed at the idea, mentally noting that I had been about the same size for several years now and that my body just wanted to be this size, basically mentally defeating myself.  And so I began, simultaneously doing the 10-day Zumba challenge, and recording all my measurements each morning.  I’ll go into more details shortly.  Anyhow, at the onset, I tried on a bunch of pants and dresses I had in my closet but hadn’t worn for years because they were too tight, and yep, they were still too tight.  Some of the pants could not be buttoned up, as in there were a couple inches of gap between the button hole and button because I was too wide for them.  My bulges.  At the end of the 3 weeks, I literally couldn’t believe it, but the pants that had been too tight were now…a little bit loose?  Could this be?  In three weeks, I lost about 10 pounds, and 1 inch off my waist.  In the time since, I’ve lost a little bit more, and am now sitting around 128lbs, give or take a couple, and my measurements went from 40/29/40 to 36/25/36. Alright, so I got a boost from doing the Zumba challenge at the same time but, you can expect similar results if you’re already working out regularly but have that last 10 plateau to get past.  Diet is so key here. 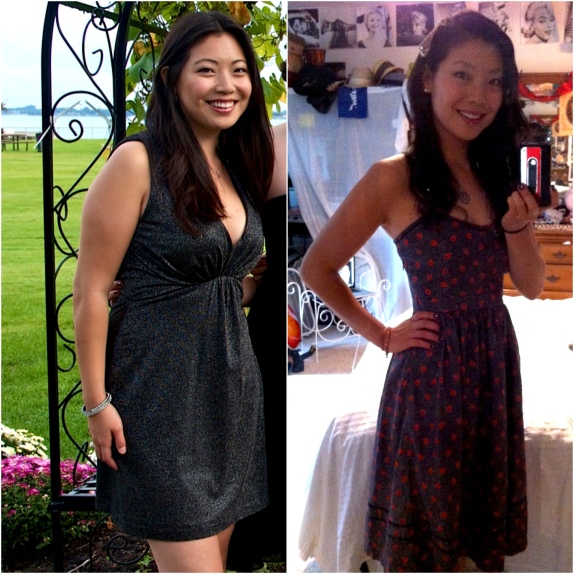 Okay, so let’s get into the nitty gritty details of the diet.  Of course if you have any sort of health issues, you should speak with your physician before attempting this.  I’m not a doctor or trained dietician, this is simply what worked for me.  And if you want, you can do your own Three Week Challenge.  My best friend has dropped also from around 180 to 145, and she’s about 5’5.5″.  She couldn’t be happier that she asked me about the diet and stuck to it once she decided to join me in my fitness journey.  As a breakdancer, breaking has gotten easier for her with less mass to move around.  She doesn’t need to worry so much about spraining her hand anymore, which was an issue when she was heavier.  And she’s so hot now!  Not that she wasn’t before, but she got hotter!  😀  Oh yeah, the measurements…I weighed myself at the same time every day and measured around the thickest parts of my upper arms and thighs, both sides, then bust, waist and hips.  I kept a chart on my dry erase board, and also entered measurements into this great little iPhone app, called WeightTrack.  It charts your progress for you and is nice for referencing to see how quickly the weight is coming off.

Alright, so here are the basics to the SCD.  Our commandments, so to speak.

For SIX days a week, one must NOT consume, meaning NO-NOs:

But what you CAN consume in those six days, and for each meal, YES YES’S:

And then the best part of this…there’s that ONE day of the week left…where you don’t have to follow the diet one bit!  You can pig out and have anything you’ve been craving all week.  So go have that cookie, and a pint, and a pizza, or an ice cream cone!  It’s your CHEAT DAY.

I personally found it helps to cook some meals in advance, like a veggie tagine, with some beans, and eggs for protein, or throw some meat in the tagine sauce.  Soups are great.  Eggs in the morning with veggies and black beans…Chipotle’s a good place for lunch, just get the burrito bowl without any cheese or sour cream!

I will testify THIS diet WORKS!  Results.  I achieved them.  And so can you.

Feel free to post questions you might have and I’ll try and answer them!  🙂  Altogether, the friends I’ve gotten to follow this way of eating have lost more than 100 pounds, when their losses are tallied.  Anyone up for the challenge?  Come back and post your results every week or in three weeks!  You may fit into that pair of jeans in the back of your closet again!  I just put on my old prom dress from high school when I was home for Thanksgiving! 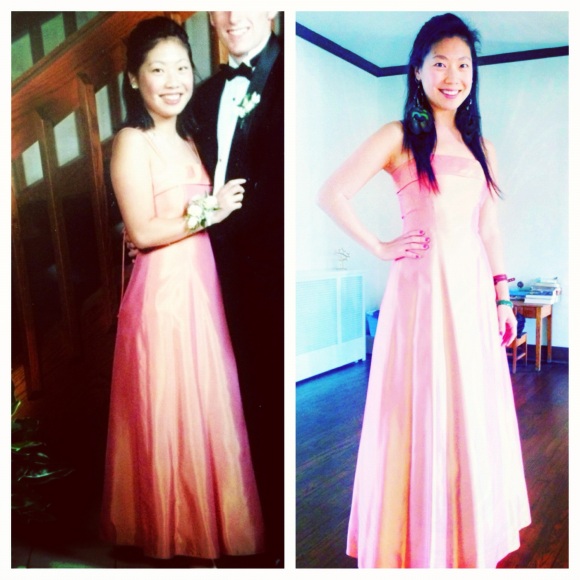