A happy belated 2014 to all of you, my dear readers!  I hope you have all been having an exciting year so far, although I know much of the US is suffering through one of the most terrible winters in decades, and definitely in my lifetime.  I am thankful every day that I moved to LA before this winter, as I really hate being cold.

Anyway, I’m still on the hunt for a theatrical agent or manager in Los Angeles, which is proving difficult.  I’d prefer not sending out thousands of postcards, and am reaching out to people I know who may be able to put me in touch with their connections.  I know I can do the work, but it’s a matter of finding people who believe in me.

Recently I did a great agent showcase with Actor’s Advantage, run and organized by Shane Russeck.  It was an interesting experience.  All the actors checked in and got their time slots, and then the five agents were in the room, and when it was your turn, you went in, performed, and walked out and you were done.  I haven’t heard anything but I know that sometimes these lead to work for some actors.  Here’s the website if you want to check out an event.  If you go, tell them I sent you!
Actor’s Advantage Showcase

In other acting news, there’s a great new trailer out for Those Who Kill, in which I played Nancy Yuan for the premiere episode.  You can click through to the really scary trailer here.  My friends Kate Boyer and Jordan Trovillion, both actresses I’ve written about before, can be seen in the creepy trailer.  Kate is the one running away from the serial killer and tied up in a chair, and Jordan is dead in a dumpster in a quick flash.  The show will premiere on A&E on March 3!

My shoulder was featured (body doubling) for a split second on the premiere episode of Rake, starring Greg Kinnear.  When I went in for doubling, they had me working some lines with the actors and Sam Raimi, who directed that episode, very kindly upgraded me to cast for my work.  I wish I could have auditioned for the actual role, but my turn will come.  Anyway, I am incredibly thankful to Mr. Raimi for his kindness.  That is the second time I’ve worked in a “background” role and been upgraded, which is very lucky indeed!  When I worked on Red Dawn, I agreed to go in as background with a very high likelihood of being upgraded, and it went through so I became that police station screamer.  (BTW, you can view Red Dawn on Netflix!)  🙂

I’m still very much enjoying my classes at the Ruskin School of Acting in Santa Monica, and we are moving from emotional prep to scenes with emotional prep, which we will be performing as our one year graduation showcase.

I was recently googling myself as I am wont to do now and then, (purely for career reasons!!!) and saw a photo of mine that was posted on the Bar Method blog by none other than Burr Leonard, the creator of The Bar Method!  That was pretty neat and also made me feel more inspired to go to my Bar classes to get even more results.

Since the holidays have come and gone, I had also gotten really into rock climbing to the detriment of my Bar routine, but it was still exercise!

Cleaning up leads and anchor, then rappelling in Red Rock Canyon outside Las Vegas, NV

But then, I used the holidays as an excuse to eat a lot more than I normally do, and after the new year, I wanted to rededicate myself to my health and fitness, and so not only did I restart my habit of going to Bar a few times a week at minimum, along with walking and cycling, and other activities like paddle ball or hiking, but I also signed up for a 30 Day Challenge through DailyHiit! They have a lot of great routines you can do at home with just a few simple exercise tools, and the workouts are High Intensity Interval Training (hence the HIIT) so are more efficient than spending an hour at the gym doing random exercises, meaning the workout videos they’ve been sending have been just 12 minutes!  Here’s a photo of my halfway point progress: 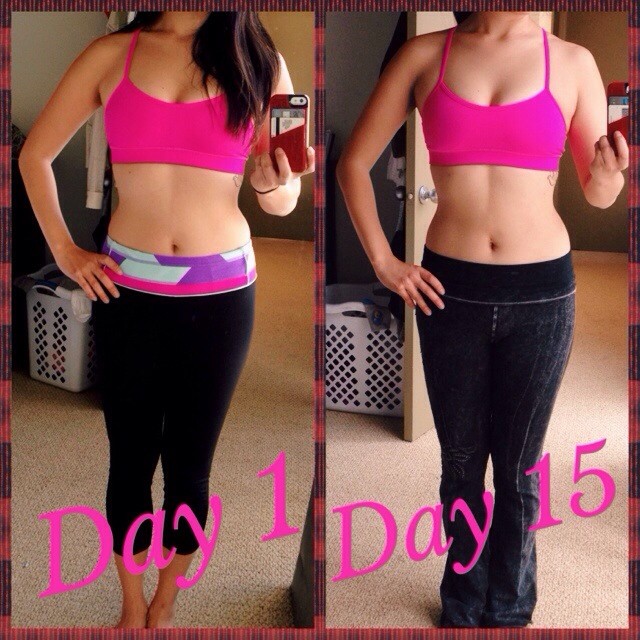 As you can see, the differences are very subtle.  What I notice the most is a more defined linea alba  which is that center line down the stomach, a tendinous stretch on the abdomen splitting the two sides of muscles.  I hope there will be even more change come Day 30!

I know I posted about my hair care awhile back, too, and the Shiseido Tsubaki shampoo/conditioner is still working wonders and my hair is so much softer than before, which is helped also by the Aquasana carbon shower head filter I installed.  Since I often do need to style my hair for auditions, I’ve got some great recommendations on styling tools, too.  I received an amazing blow dryer for Christmas and it dries my hair so quickly, and keeps it very smooth, and I can adjust it to no-heat, as well.  It’s the Elchim Ionic and is a pro level tool.

I also am extremely satisfied with the Hot Tools curling iron I bought last year.  The 1″ size is perfect for creating beachy and classic waves, although, the 1″1/2 might be nice for softer waves.  I got the 1″.  I usually spray some of the Bumble and Bumble Does It All styling spray in for heat protection.

BB does it all styling spray

I had a lot of fun last night self-taping myself for some roles, and did a quick change in between, and I’ll leave you with this funny image of me.  Signing off until next time!  And please make sure to watch Those Who Kill when it comes out March 3!!!!